ONLINE LEARNING: Film Yourself Crafting To Show Your Teacher

If you’re taking a virtual class and want to show your teacher how you’re doing, I encourage you to try this. Let me know in the comments below how it works for you.

This video was filmed in January of 2019. It demonstrates how I let my creative juices flow, got resourceful, and used some everyday items I already had at home to make a DIY camera tripod for my smart phone.

I wanted something that took up very little space in front of my face and between my forearms. I tried a short tripod that I bought from Walmart, but it took up too much room on my desktop.

I have filmed several crochet tutorials, which are still available on my YouTube channel, using this set up. The lighting was nothing more than a ceiling light above my kitchen table.

What you’ll need for the older version (IN THE VIDEO ABOVE):

Substitute these items for the newer version (IN THE PHOTOS BELOW):

Instead of the hair ties, use magnets – one for the back of the phone and 3 for the tripod – and clear packing tape. (Keep reading for more details.) 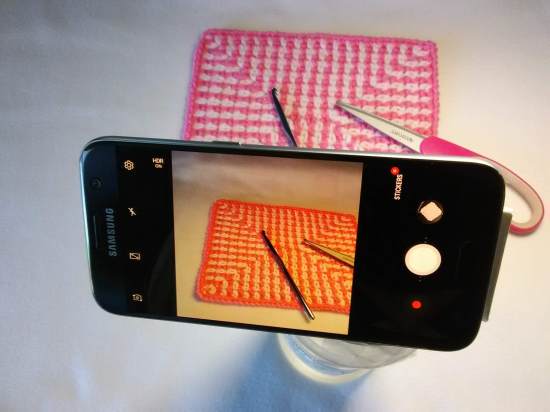 I need to be able to see my hands, while filming and this set up works very well for that.

After using the above set up for a few months, I decided to work on making the camera more secure on top of the jar. 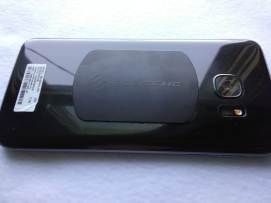 I attached a magnet to the back of my phone. Do a search for “magnetic cell phone car mount.” Here’s a link to just the magnet that goes on the back of the phone. (I don’t have any affiliation with Amazon. Maybe, some day I will.)

The photo above show how I used clear packing tape to secure the cardboard wedge in place. Then, I taped 3 round magnets to the wedge with another layer of clear tape.  Do an internet search for “small round craft magnets.”

These are about 5/8″ in diameter. I got them at Michaels craft store, but you can order them online from various sources. They have adhesive on the back. You just peel off the paper and stick them to your project.

As you can see above, I made some changes to the newer version of the this tripod. I replaced the crocheted swatches with rolled up cardboard to keep the wedge shape more stable. (Psst! It’s a toilet paper roll!) 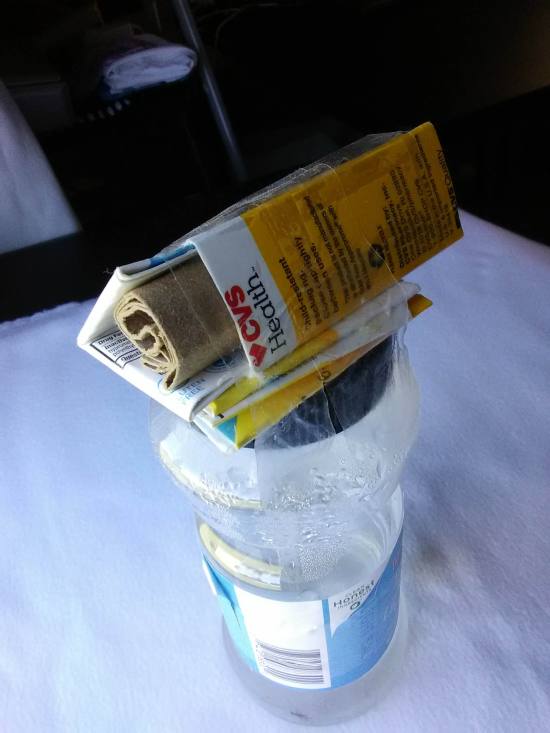 Here’s a view from the other side of the wedge. In this photo, you can see I’ve folded up some additional pieces of thin cardboard and placed them under the bottom of the wedge, to give it a steeper angle. You’ll have to do your own experimenting. 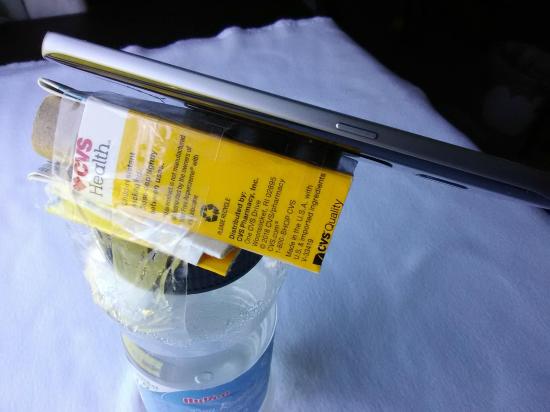 The photo above shows the slim magnet on the back of the phone “stuck” to the 3 small round magnets on the mount. Believe it or not, this holds quite well.

Notice the phone isn’t exactly centered on the mount. That’s because the phone camera will show the peanut jar, if I don’t move it out to the side. It’s a balancing act to get that part right.

Here’s another view that shows the phone offset to the left of the jar. This is why the magnets have to be relatively strong.

I recently purchased a lamp that I like really well. It sits on my desk, has a very flexible neck, and moves around easily on my desktop. It has three colors of light and 5 levels of brightness within each level. I ordered it online from Costco. (No affiliation here, either.)

That said, often the best light source is the window next to my desk. Natural light has a lot going for it.

At certain times of the day, however, the sun coming in the window can be exceptionally bright, making for hard edges and deep shadows. So, I hung a “curtain,” made of a single layer of bubble wrap.

I taped several pieces of the bubble wrap together to fit over the entire window. I then folded it over and taped it along the top edge, to make a “hem.” I inserted a bungee cord into the “hem” and hung it in the window, behind the regular curtain.  This inner “curtain” can be let down or pulled  back, as needed, to filter the light.

Well, there you have it! Let me know in the comments below what you think of this idea. Did you try it? How did it work for you?